Ujjaya - The Master of Crossroads (ca467) 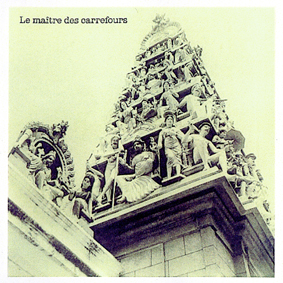 Ujjaya - The Master of Crossroads (ca467)

This album was played for a ballet made by Vanessa Villain, called "Subliminal", telling how the man exploit the Earth and how in return nature take her revenge. Shortly after happens the one of most devastating tsunami in south-east Asia.
Raksha Bandhan is dedicated to Ganga Bharty & Morihei Ueshiba.
The all album is dedicated to the Sadhu who lived on the top of Arunachala (the hill behind Tiruvinamalai)
---
Ujjaya : The Master of Crossroads (Le Maître des carrefours)

01 - Raksha Bandhan (bracelet of protection)
Keyboard, guitar effects, whales, congas / dedicated to my spirit sister Ganga Bharty who spent 6 years in a cave ilost in the snow of Himalaya. In india each year Sisters and brothers feast each other. The sisters attach a red bracelet on their brother's wrist to protect them from evil if they had to do or to go in a dangerous place (the strict translation is to neutralize the demon - Raksha = Demon, Bandhan = to attach)

03 - Arudra Darshan
ambience: Inner sanctum of the temple of Tiruvinamalai (South India), Congas, wave (electric buzz design by guitar pedal) Arudra Darshan celebrate the auspicious side of Shiva. That day is also the birthday date of one of the greatest indian master: Ramana Maharishi who spent all his life at Tiruvinamalai

05 - Trishoulon
3 processed didgeridoos, Mridangam. The trident (trishoulon inTamil, one of the south india language) is the arm of Shiva. It mean the mastery of Shiva over the 3 tendacies (the gunas) that rule the world (i.et Rajas, Tamas & Sattva, or Activity, Inertia & equilibrum). But meeting Shiva has always something awesome.

06 - The master of crossroad
Bamboo chimes, gong, tibetan bowls, E-bow guitar. The overture speech, made in Cambodian language, is speaking about the Angkor Vat era artists ("In those time only artist could invoke the Gods by their art because they are half-clean & half-dirty)


Ujjaya is one man project, Randriambololona Hery, living in France but who have malagasy root, and travel throughIndia and South-east Asia, playing dozen of exotic instruments. At the very begining in the ealy 90 I was an electric guitarist that was fascinated with the unexplore potency of that instrument. As a spiritual seeker too, my music basically rooted in the metal, prog rock was aiming more and more toward the ambient music.

Uploaded by Clinical Archives on September 6, 2011